the squares: black, red and white 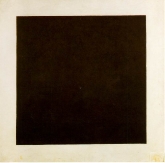 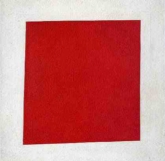 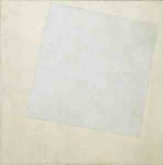 Suprematism usually has been reduced to the supremacy of colour. Malevich analysed the symbolism of black colour in various cultures (mysterious powers, darkness, fear, destruction, sadness, mourning, death) and then he made a synthesis: a black surface symbolised the absolute, unlimited space, eternity, and mystery. Referring the black colour to the form of square he wrote:
White colour, like black colour, was the symbol of the absolute, but it was related to light, illumination, and perfectness. Red colour symbolised the path from darkness to light. Malevich's squares from 1913-1918 (the exhibit with the white square) were ideal philosophical constructs. Later they acquired meanings: economic (black), revolutionary (red) and political (white) which contributed in fundamental criticism of the artist and his exclusion.
These quotations were taken from the book “Kazimierz Malewicz, Świat bezprzedmiotowy, Biblioteka Bauhausu” (Die gegenstandslose Welt, 1927) translated from German into Polish by Stanisław Fijałkowski and published by “słowo, obraz / terytoria”, Gdańsk, 2006